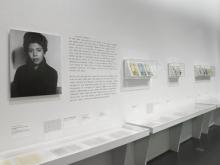 A new exhibition, “Twice Militant: Lorraine Hansberry’s Letters to The Ladder” examines a lesser-known aspect of the life of the award-winning author of the landmark play A Raisin in the Sun, who died in 1965 at the age of thirty-four. The exhibition features documents and publications addressing Hansberry’s identification as a feminist and a lesbian, and will be on view in the Herstory Gallery of the Elizabeth A. Sackler Center for Feminist Art from November 22, 2013, through March 16, 2014.

More >
"I was born on the Southside of Chicago. I was born black and a female."
More >
"I sit at this desk for hours and hours and sharpen pencils and smoke cigarettes and switch from play to play—Sidney, Touissant, Les Blancs and—nothing happens."
More >
"And as of today, if I am asked abroad if I am a free citizen of the United States of America, I must only say what is true…"
More >
"We’ve been trying very hard. . .in America to pretend that this greatest conflict didn’t even have at its base the only thing it has at its base. . .Person after person will write a book today and insist that slavery was not the issue."
More >
“…All art is ultimately social; that which agitates and that which prepares the mind for slumber. The writer is deceived who thinks that he has some other choice."
More >
". . .It grows out of a thought of mine, as I study history, that virtually all of us are what circumstances allow us to be and that it really doesn’t matter whether you are talking about the oppressed or the oppressor."
More >
"I think that imagination has no bounds in realism—you can do anything which is permissible in terms of the truths of the characters. That’s all you have to care about."
More >
"It is in the nature of men to take life for granted; only the absence of life will seem to you the miracle, the greatest miracle—and by the time you understand that it should be the other way around—well, it will be too late, it won’t matter then."
More >

Screening tonight in Toronto! On Friday, September 8, 2017, the world premiere of Lorraine Hansberry: Sighted Eyes/Feeling Heart, a documentary about playwright Lorraine Hansberry, opens as an OFFICIAL SELECTION at the Toronto International Film Festival.