I am a writer. I am going to write.

As part of the 2020 New York LGBT Film festival (NEW FEST), there will be a featured panel discussion about the release of  HBO Max’s docu series EQUAL. 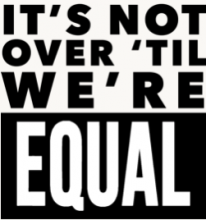 Samira Wiley: 'It Was a Gift' to Play Lorraine Hansberry in HBO Max Docuseries

HBO Max docuseries EQUAL will be released to the public on Thursday, October 22.

On the 62nd anniversary of the Broadway premiere of Lorraine Hansberry’s “A Raisin in the Sun,” Cornell West and Tricia Rose reflect on the Black literary tradition as they focus on the legacies of Lorraine Hansberry and Gwendolyn Brooks as revolutionaries and exemplars who are often misunderstood as the “darlings of the white liberal establishment.”

Debuting in July 2020, professors Cornel West and Tricia Rose navigate the balance between hope and uncertainty in their weekly program, The Tight Rope.

Tricia Rose: Hansberry’s A Raisin in the Sun and the ‘Illegible’ Politics of (Inter)personal Justice
In a recent conversation about Black radical artist and thinkers, Gwendolyn Brooks and Lorraine Hansberry, on their weekly program, The Tight Rope, Cornel West and Tricia Rose note that the work of these two revolutionary artists is often misunderstood and stripped of radical political content and possibility.
More >