Home > About the Trust > Who We Are > Jewell Handy Gresham-Nemiroff

A device is a device, but. . .it also has consequences: once invented it takes on a life, a reality of its own. So, in one century, men invoke the device of religion to cloak their conquests. In another, race. Now, in both cases you and I may recognize the fraudulence of the device, but the fact remains that a man who has a sword run through him because he refuses to become a Moslem or a Christian—or who is shot in Zatembe or Mississippi because he is black—is suffering the utter reality of the device. And it is pointless to pretend that it doesn’t exist—merely because it is a lie! 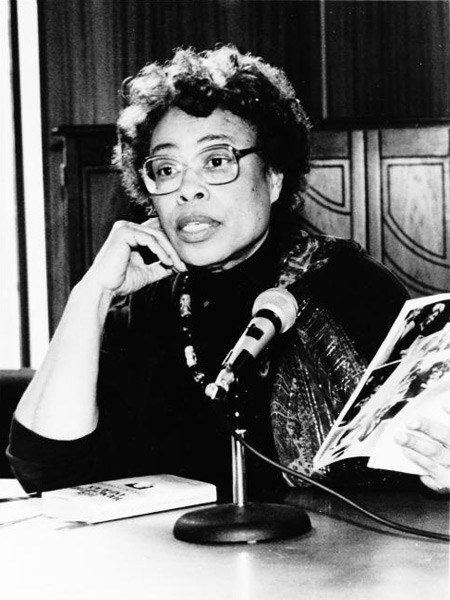 Jewell Handy Gresham-Nemiroff was born to schoolteacher parents in Wilcox County, Alabama, in the black belt region of the Deep South. She was reared in Lafayette, Alabama, and earned her undergraduate degree at Tuskegee Institute (now Tuskegee University) followed by a master’s degree in English drama and literature from Columbia University and a doctoral degree in literature and language from Teachers College, Columbia University in New York.

During the 1970s Dr. Gresham was the Executive Director of the Coalition of Concerned Black Americans, a group of academics, lawyers, clergymen, and grassroots organizations concerned with the effects of the criminal justice system on the Black community. In 1989 she conceived and co-edited a special issue of The Nation magazine, “Scapegoating The Black family: Black Women Speak,” which drew together many of America’s most eminent African American women as contributors. In 1990, this issue was one of the five finalists chosen by the American Association of Magazine Editors Publishers as “best issue on a single topic.”

Dr. Gresham carried on the work of her late husband, Robert Nemiroff, as literary executor of the estate of Lorraine Hansberry. In 1995, she founded the Hansberry-Nemiroff Archival Educational and Cultural Fund devoted to the contributions of the artist to American arts and letters and to Hansberry’s deep concern with human rights.

In 2000, the Hansberry-Nemiroff Fund launched a major project called “Race and Democracy” to encourage citizen participation in examining the interconnectedness of race, racism, and democracy. The first public program treating this theme was launched at Town Hall in New York City. The first international conference was held in Stockholm, Sweden from August 28–30, 2000. The project was a sequel to The Nation special issue by African American women a decade before, expanded to the international level. That same year Dr. Gresham transferred the Lorraine Hansberry Papers to the Schomburg Center for Research in Black Culture in New York City, fulfilling Robert Nemiroff’s intent to make the documentary record of Hansberry's life and work accessible to the public.

In 2004, Dr. Gresham was one of the primary individuals responsible for bringing Lorraine Hansberry’s A Raisin in the Sun to Broadway, marking the 45th Anniversary since the original Broadway production made history. This production went on to earn four Tony nominations and two awards for Best Actress and Best Supporting Actress in a Drama.